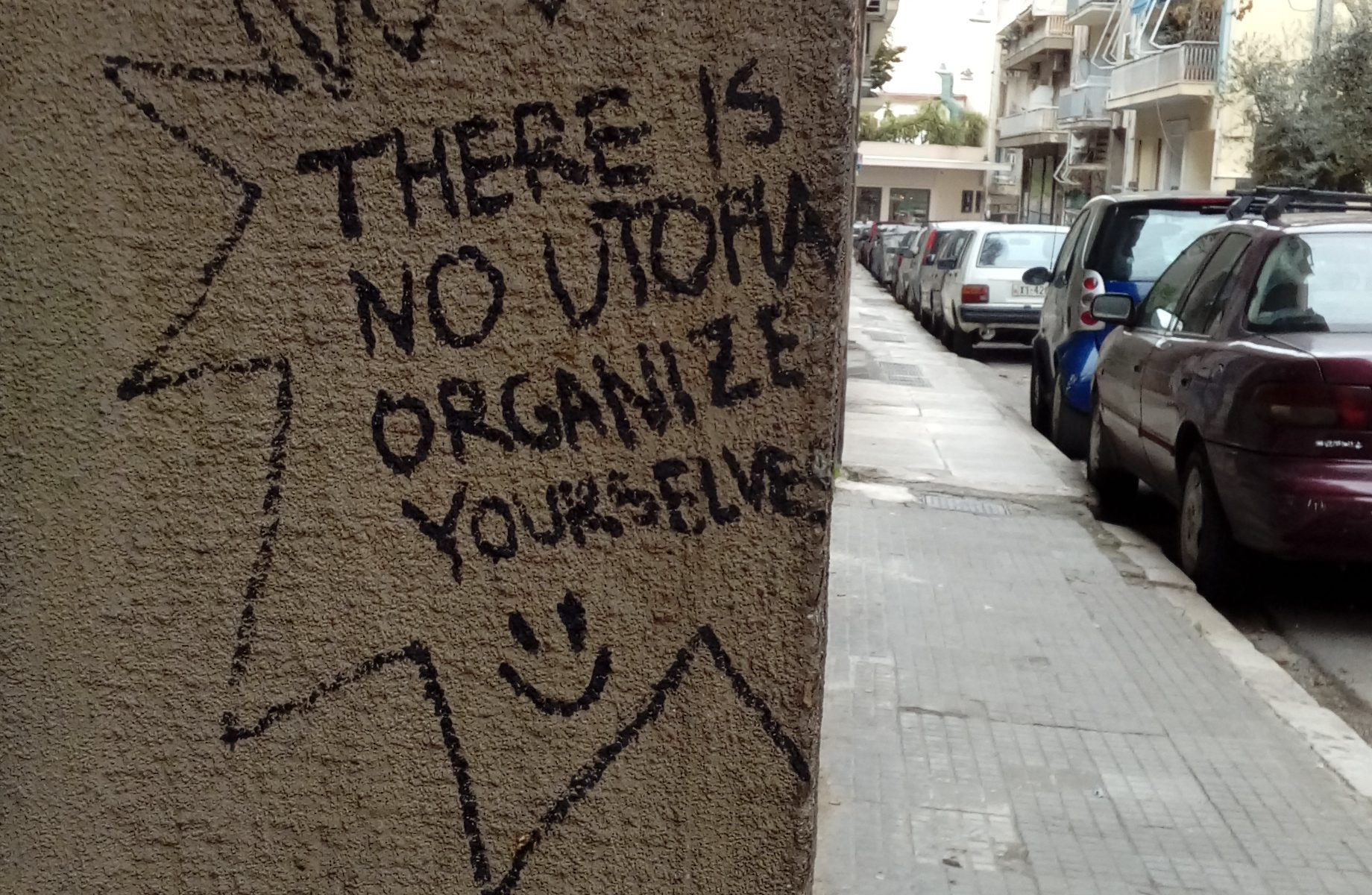 The capitalist mode of production can not be perceived as a single entity which scales the whole globe. This means the end of the duality of capital/proletariat. In it’s place steps the Empire which contains a multitude of relations between it’s participants, material goods and obscure motivations.

The Empire expands through assimilation and colonization and stretches into many levels of human existence, devastating the emotional and material landscape, while spreading bio-cide. The industrial society compares only to its own measure, which are based on expansion and progress.

With the ever growing need to exchange the goods of industrial production come the requirement to negotiate their value. The industrial society bows to the Spectacle which is indistinguishable from the alienated persona of the former worker. In a fetish for commodities representation becomes substitute for being and challenges every subject through the encounters of products in their leisure time to alienate themselves. Thus the Spectacle takes everyone as representatives of itself and mediates their experiences as representations of it’s spectators. A consistent performance in the Spectacle consists of various behaviors that produce particular roles as specialized divisions of labor.

As the industrial society produces in excess which use value is pronounced in the dialectic of the constant colonization of new markets and representations, recurrence of all things as they are in any moment of the global economy, the product alienates the time free of production for society to prevail. The Spectacle propagates the Empires’ new colonies for an excuse of its impoverished aesthetic appropriate, assimilate, annihilate. Consume becomes a commodity and fails to satisfy real desires from which participants remain alienated, producing for the constant war new fields and opening new markets.

Removing the use value in favor of representation importance is attached to material acquisition. Instead of spreading the abundance of constant miscalculations to exercise control is excluding the most from access.

The immediacy of global interactions invalidates space in favor of time mediated by the clock synchronized across all time zones. Since there is no escape from the Empires working hours and mediations history becomes a chronic disease and by repetition realizes the eschatology of progress.

Expelled from participation in the space surrounding displacement becomes normalized as a control mechanism to the participation in the Spectacle which occupies the space to represent itself. As money and goods are moved around freely nomads have to follow to satisfy their basic needs from which they are removed and not allowed access to locally.

A barbarian being someone not able to speak the tongue of the polis (city), power is exercised in language. Communication is the mode of the Spectacle and puts its voices of representation and majority against the incomprehensible expressions and threatening gestures of the barbarian, who cannot be mediated.

Taking back space from control, giving up satisfaction for desires, deepening experiences of abundance, not respecting mediations over raw expression amounts to acts of civil war against society in all fragments, while the Empire is only interested in forgetting all causalities of insurrection by relating them to its own global conquests.

The experience of complete mediation continues to separate as specialization disturbs the abilities to navigate everyday live without it. A return to direct experience doesn’t allow for economy as the barbarians expressions don’t follow the communications of the Empire and don’t produce any value or excess beyond the instant moment. Any groups departing from the society of the Spectacle are in danger of recreating its exclusions and mediations and therefore become then new vanguard of colonization if they don’t consciously redirect the flow of images. Models of equal participation that break from the disowned spectator perspective cannot be measured by contribution to the group as every subject acts to its own interest and benefit, while inter-depending for the feral decolonization and seizure of necessary resources to act upon their desire, and is thus fighting by means of civil war. Urban landscapes offer the field on which barbarians can conspire for mutual power in tribal non-structures of cliques, bands, circles or scenes bound together by experiences out of the ordinary overflow of images.

In the fragmented realities of the Empire and its industrial society, psychic racism, impoverished aesthetics and spectacular materialism create outcasts, barbarians and nomads riding on the tides of exchange glowing freely though everyday life. Symbols and signs don’t only represent, but form their own ideas. Alienation returns as a new mythology and the Empire asks faith in its’ newest conquests and products . Devastating and flattening every psycho-topology that regards richness and depth of experience, a landscape of brands and concrete extends into meaninglessness.

In this moment begins the construction of everyday life in New Babylon. Antagonized by the working schedules and commodities we meet as wandering barbarians in the streets. Our rage against the Empire allows us to relate to each other beyond the borders of language and other separations as race, class, sex. Upon entering New Babylon we rise up from the industrial debris of society in a collective effort to decolonize, not to be controlled and to form our lives in constant insurrection waging our civil wars against the lackeys of the Spectacle. Everyone’s a stranger in New Babylon as we come together from all angles and corners of the world, in all shapes and colors our feral bodies take, not shy to live in different cultures and contradictions to forward our individual and collective desires. With this we announce the opening of a new political-living space in (Squat’ Street). New Babylon breaks doors, laws, borders and habits as we rattle the cages of our separateness. We come together as subjects of our own liberation and therefore cannot be contained in one place but federate and affiliate in spaces of struggle and self-determination freely. From day one we are trans-national and wild with rage against the death machine of structural violence and mutual repression. Building meaningful relations between those close and far from our individual performance helps us to formulate affinities and oppositions that transform the existing political culture. Enabling our selfs to depart from internalized prejudice, morals and culture and taking the courage to change our behavior is to conspire for power, not over one another but mutually, which challenges us to win mutual benefits in compassionate play. 😉

Thats why we decided to host our selves and our ideas in a squatted place in Tzavella street,Exarchia.We call for support.More analytical texts will come within the next days.

“The alienation of the spectator to the profit of the contemplated object (which is the result of his own unconscious activity) is expressed in the following way: the more he contemplates the less he lives; the more he accepts recognizing himself in the dominant images of need, the less he understands his own existence and his own desires. The externality of the spectacle in relation to the active man appears in the fact that his own gestures are no longer his but those of another who represents them to him. This is why the spectator feels at home nowhere, because the spectacle is everywhere.” – Guy Debrod